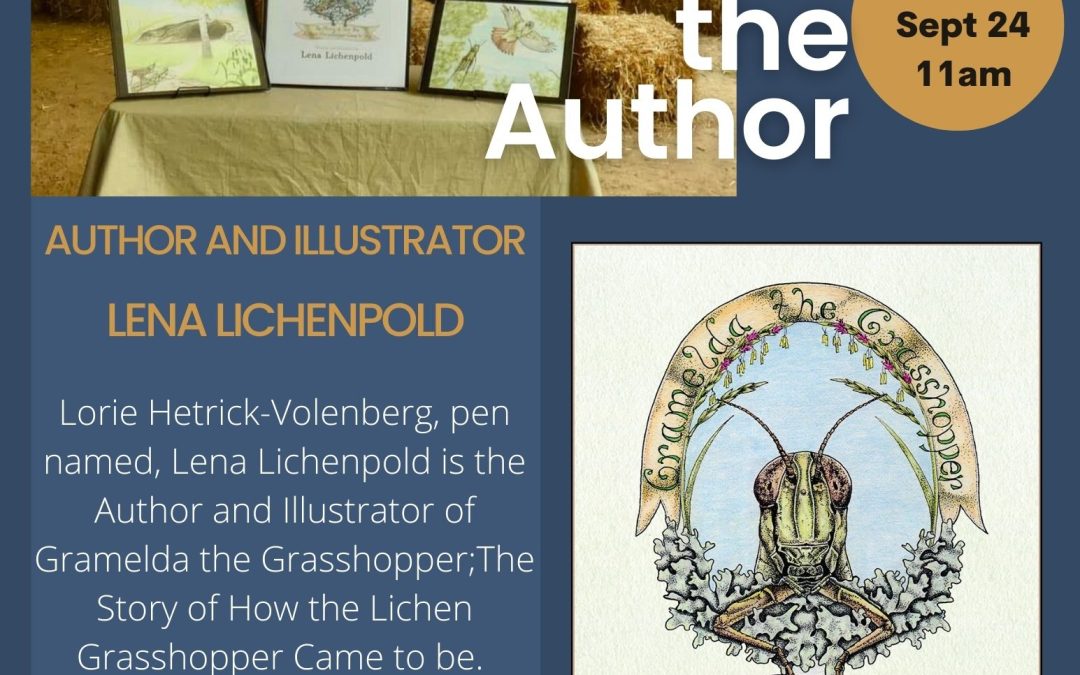 Come join us for Lorie Hetrick-Volenberg, pen name Lena Lichenpold, Author and Illustrator,  with her amazing children’s book, “Gramelda the Grasshopper; The Story of How the Lichen Grasshopper Came to be.”

“Gramelda the Grasshopper has barely become an adult when she finds she may no longer have enough to eat in her Tallgrass Prairie because a drought is causing the dwindling of available food. Then Gramelda meets Lodan, a Red Legged Grasshopper like her, who tells her he is leaving the prairie. Together they venture off to a distant glade in search of a reliable food source. The reader finds a beautifully illustrated world of determination, love, and the natural obstacles found in nature on an animal’s journey through the circle of life. The story culminates in the new species of Lichen grasshopper being born in the glade.

This book is designed to educate children (and adults) by depicting many facets of Tallgrass Prairies and Glades of Missouri, animals and plants that live there, and their roles and importance in their ecological communities. Illustrations and descriptions in the end matter include an index of animals and plants described in the text. It also includes a glossary of certain terms associated with stages of life of many insects, and food sources for life forms portrayed that relate to the “Web of Life.” Also included is a Teacher and Reading Group Guide with an activity section which includes Studies of the ecosystems, drawing exercises, and coloring pages. Pages “keyed” with a cameo of Gramelda indicate their inclusion in free downloadable activity pages that can be found at the internet address provided in the book.” ~Amazon.com

Lorie Hetrick-Volenberg grew up in the suburbs of a big city, but her family was never away from a campground or a park for long. Her love for nature and animals was instilled in her at a very young age, and she began drawing animals since she could hold a pencil. Later in life, Lorie found herself living her dream out in the country on a small farm with her husband and horses. She started to volunteer at Graham Cave State Park and found that she really enjoyed it, and she was soon hired on as a seasonal naturalist. Part of her work was to research and give educational programs to the public. The other part of her job was to protect and care for the natural resources found within the park. This prompted her to put her research, writing and artistic skills together, and she began to write and illustrate her first children’s book. Lorie’s pen name, Lena Lichenpold, was given to her by her husband. Lena is a common Norwegian name from her husband’s heritage. Lichenpold represents two things. The first is Lorie’s love for studying Lichen. The second is a play on Aldo Leopold’s last name. Aldo Leopold was one of America’s great naturalists who sculpted modern day environmental ethics and was a strong force in the movement for wilderness conservation.

“This book is beautifully written and the illustrations are outstanding! The activity pages in the back are the perfect bonus to a marvelous book. Great for classroom, homeschool and any library.  Children and adults alike, this is a book you will want to read on purpose.” ~ Kaye Petts, Director, Eleanor Ellis Public Library