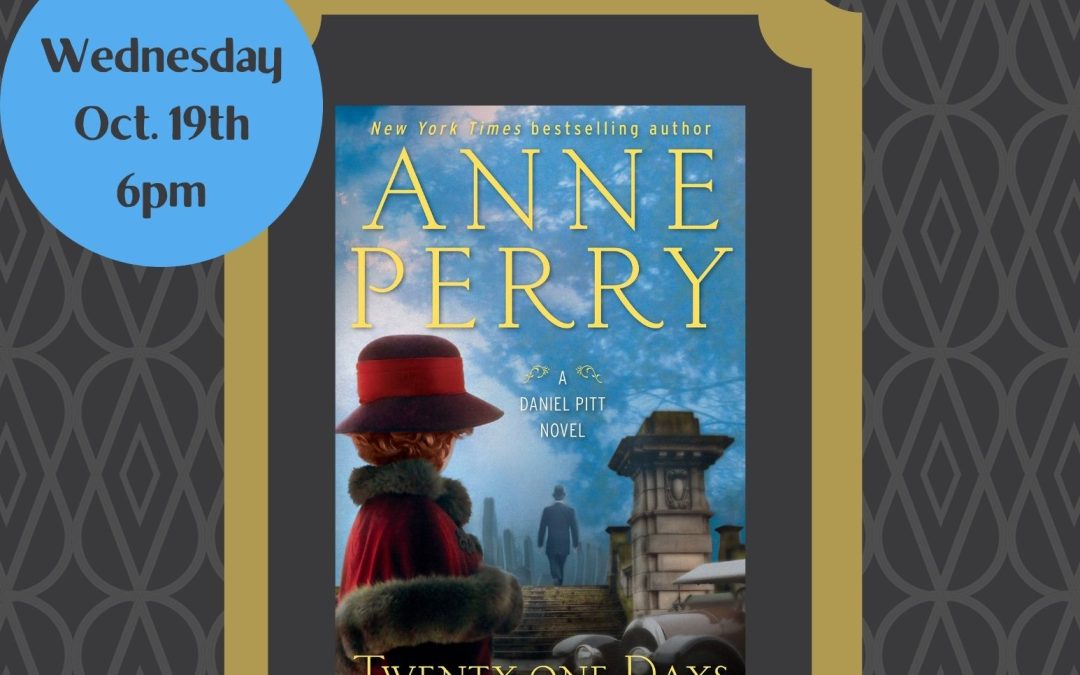 Join us for Next Chapter Book Club meeting on Wednesday, October 19th at 6pm

The book choice is Twenty-One Days, a Daniel Pitt Novel by Anne Perry and will be facilitated by Linda Tucker.

Pick up your copy at the library or call to reserve. Book Club is free and open to Adults. Call the library for more information. 715-545-2887

You can find the upcoming Book Choices here.

The first book of an all-new series, a young lawyer races to save his client from execution, putting him at odds with his own father: Thomas Pitt, head of London’s Special Police Branch.

1910: Twenty-five-year-old Daniel Pitt is a junior barrister in London and eager to prove himself, independent of his renowned parents’ influence. And the new case before him will be the test. When his client, arrogant biographer Russell Graves, is found guilty of murdering his wife, Daniel is dispatched to find the real killer before Graves faces the hangman’s noose—in only twenty-one days.

Could Mrs. Graves’s violent death have anything to do with her husband’s profession? Someone in power may be framing the biographer to keep damaging secrets from coming to light. It is a theory that leads Daniel’s investigation unexpectedly to London’s Special Branch—and, disturbingly, to one of his father’s closest colleagues.

Caught between duty to the law and a fierce desire to protect his family, Daniel must call on his keen intellect—and trust his natural instincts—to find the truth in a tangle of dark deception, lest an innocent man hang for another’s heinous crime.

“Readers will quickly fall in love with [Daniel] Pitt, following along as he investigates a gruesome murder and chuckling as he throws those involved off kilter. Perry is a master at bringing setting to life, and readers will be taken in by the time and place as they get to know Daniel Pitt and those close to him in this engaging novel.”—RT Book Reviews

“The maven of well-crafted Victorian mysteries and author of both the William Monk series and the Charlotte and Thomas Pitt mysteries introduces the Pitts’ son, Daniel, junior barrister, in this first of what proves to be an intriguing, entertaining, and character-centric new series. . . . Perry introduces Daniel and his cohort, the brilliant Miriam Fforde Croft, and raises the knotty question of whether some clients are truly undefendable.”—Booklist

“[Anne Perry] seems just as comfortable in 1910 as she ever did back in Victoria’s day.”—Kirkus Reviews